Trying To Make Custody Work Without A Legal Battle 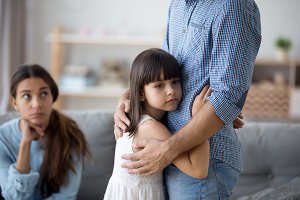 With women getting a strong foothold in the workforce and often becoming the primary breadwinners in some families, traditional child custody outcomes have begun to shift. The “tender years” doctrine that provided for favor towards mothers during custody battles was abolished by most states by 1994, and now working women are finding it a liability to be career focused when they enter into a custody battle.

A shift in traditional roles has created more stay at home fathers, and more mothers who are becoming involved in careers that can often be demanding. Unfortunately, this shift in trends can significantly affect a mother in the event of a divorce. In a recent article called “Custody Lost” by Sally Abrahms for WorkingMother.com, one woman found out the effects of pursuing her career and how the court now views working mothers in child custody proceedings.

After a marriage of 10 years, Julie found herself in the midst of a custody battle to keep her children.  She had worked hard for years to support her children while her husband was unemployed and was shocked when he filed for primary custody during their divorce. Throughout the proceedings, her successful career was portrayed as so demanding that she was neglecting her children and that her husband marketable skills had been reduced due to not being in the workforce for five years. While Julie eventually felt confident of the proceedings she was shocked to find that the court had ruled in her husband’s favor and decided that her career might interfere with primary custody.

What are the best steps for making custody work?

Unfortunately long, drawn out child custody cases can occur during divorces causing both the children and the parents to suffer throughout the process. With the changing trend in court custody cases, how can working women find ways to make custody work without suffering the consequences of a devastating court decision?  If you are faced with a possible custody dispute, following the steps below may help get you through deciding custody without a long protracted battle.

Try to focus on parenting, not on the divorce

When discussing with your ex how you will tackle the custody and visitation schedule, make sure you focus on what is best to do as parents and leave out the disagreements that led you to the split.  Discuss your child’s schedule, school routine, and other issues that would affect where they should hold primary residence or what visitation schedule will work best to cause as little disruption as possible in their lives as possible.

Don’t use the children as leverage

Emotions can be extremely heated during a divorce, and one of the easiest ways to hurt the other parent is by withholding their ability to see or spend time with their child. Just because the relationship did not work out between you and your spouse does not mean that each parent’s relationship with their child should not be able to succeed.  While it may be hard to always keep a happy face when around your children, learn to at least be cordial to each other when they are around and make sure you do not resort to making them messengers or information gatherers during the divorce.

Is mediation a good option?

While what led to your divorce may seem like there is nothing you will be able to agree on, when it comes to your children, it is worth putting in some effort.  Many parents are now testing out the waters of mediation before moving to a court child custody case.  It is important to remember that odds are the best person to be a partner in raising your children is your ex so trying to work out a visitation or custody schedule during mediation can not only make things go quicker and smoother but will often be less stressful on the children.

The vital phrase to remember is “hope for the best, but plan for the worst.”  Despite your best efforts, there may be no way to avoid a child custody court case, so it is essential to be prepared from the beginning.